Last week I had a job interview.  I arrived late.  Not five minutes late, but more like twenty minutes late.   Oh, I guess I should mention, I was not interviewing for a job, but was instead interviewing candidates for a position with FRG.  Anyway, I was late.  It wasn’t my fault, glad I wasn’t interviewing for a job because that’s a lame excuse.  I could not find parking.  The interview was in the Playhouse Square area.  Every lot within 5 blocks in all directions was full.  I was lucky enough to be in the right place at the right time and found street parking by the Wolstein Center.

After the interview I decided to stop over at the new Heinen’s store at 900 Euclid Avenue to pick up a snack.  The store, in the renovated Cleveland Trust Building, is as impressive as everything I have read about it.  But more impressive was the number of people in the store – likely coming from the 9, office buildings and nearby condos.   And the number of people milling around the streets around the store at three o’clock in the afternoon on a Thursday.  For a minute, I actually thought I was in Chicago.  The early signs definitely seem to point to this new Euclid Avenue location being a success for Heinen’s. 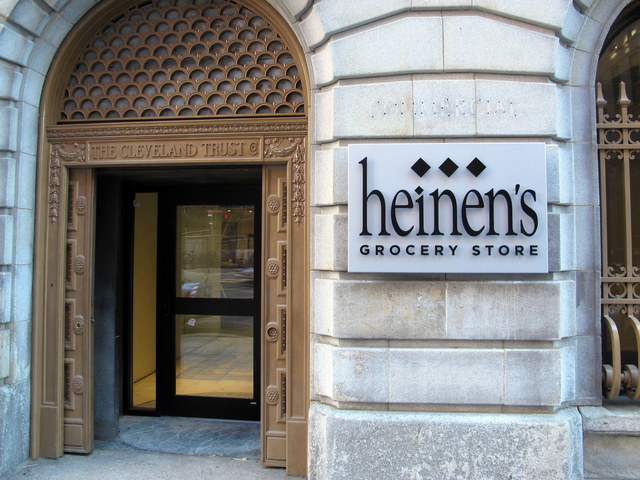 And why wouldn’t it be – Heinen’s is capitalizing on a growth market.  In late 2014, about 13,000 people lived in downtown Cleveland and the projections are within the next seven years that number will exceed 25,000 residents.  And recent US Census Bureau data shows that the largest group of residents downtown are Millennials (ages 25 to 34), but the fastest growing is Baby Boomers.  And Baby Boomers moving downtown have disposable income for organic kale chips.

The Heinen brothers are not the first grocery retailer to invest in Cleveland.  In 1994, the Ohio City neighborhood dreamed that it would be what it is today.  To make that happen Ohio City leadership knew they needed a flagship tenant to help transform the neighborhood into a home buyer and renter destination and they approached Dave’s Supermarkets.  Today, Dave’s has 14 stores throughout northeast Ohio many of which are in urban neighborhoods.  Dave’s opened, and an underserved neighborhood was served.  Soon after the Ohio City neighborhood flourished, creating jobs and enticing residential and commercial development.

For change to happen someone has to have the foresight and courage to act.  What I like about the resurgence in Cleveland is there are several retailers, developers and people who are not waiting to invest – they are investing now.  And as Dave’s has shown and Heinen’s will show – you build it right and they will come.  If having a thriving downtown means I need to endure traffic and a 5 block walk for parking – I will happily endure.