I have always been intrigued by the intersection of Warrensville Center and Cedar Roads that brings together South Euclid and University Heights on the east side of Cleveland.  When I first encountered the area in the Spring of 1998, it was a bustling with a mixture of local shops and restaurants, and a mere sprinkling of national retailers.  I quickly learned from my in-laws that the area had a rich cultural history.

Fast forward 15+ years, and the area is still bustling, but boy has it transformed.  The majority of the small local shops and restaurants have been replaced by the likes of Whole Foods, Macy’s, Target and several national quick and light service restaurants (eg Bob Evan’s, Chipolte, Menchie’s, Five Guys to name a few).  Though I hate to see the loss of much of the history, the transformation does actually fit a big portion of the area’s demographic as it is located within a stone’s throw of John Carroll University and Notre Dame College, and Case Western Reserve University is less than 4 miles away. 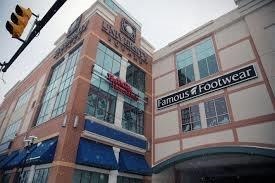 When passing by the area you would never know that there is a 290,000 square foot property at the intersection that is at 24% occupancy and in financial turmoil.  That is the current state of University Square Shopping Center that is occupied by Target, Macy’s and TJ Maxx.  In 2013, University Square (which by the way cost over $50M to construct) was purchased for a mere $175,000 by a real estate speculator, however, the purchase also came with a $12M bond and tax debt which has not been paid.  So a property located in an ideal area remains under-utilized and in financial turmoil.